You Should have High Expectations for your State Representative! “Fairness” per Merriam—Webster: “fair or impartial treatment: lack of favoritism toward one side or another.”

I think that focusing on fairness to all affected parties can help us find common ground to start a conversation. I’m running because it’s time for our representatives at every level of government to listen and fully understand NH citizens’ wants, needs, and ideas. How else can we solve problems with common sense solutions that are equally fair to all parties? Please have very high expectations for my job performance. I won't let you down.

I need your help to better understand what matters most to you. Please take a minute to sign up for my email list and to participate in this week's survey. Both are available on this site's Home page, and will help us have a conversation both before and after the November 3rd election.

I’m the oldest son of a railroad conductor and a dental hygienist. I grew up in the New England town where the “shot heard ‘round the world” triggered the American Revolution. For six years beginning at age five, I walked to school each day past the flagpole on the Lexington Battle Green that reads “Birthplace of American Liberty”. The concepts of freedom and fairness are ingrained deeply in my DNA. Would there have been a revolution if the colonists were being treated fairly? Freedom with fairness is what has made America the greatest country on the planet.

My wife and I have been happily married for over 45 years. We are both public school graduates with 4-year college degrees. She taught in several New England public schools before staying home to raise our children. She later helped create and manage our “mom and pop” small businesses and also created and managed a nationally-accredited preschool to serve our small town. I have a BS in Engineering from Tufts and an MBA from Rensselaer. We have three adult children and have been loving grandparenting for the past 12 years. I currently work on the management teams of two NH small businesses: One sells and services standby residential and commercial power generators; The other is a cabinetry and wood furniture manufacturing company. Our two companies have already created dozens of well-paying Made-in-America year-round jobs and as the businesses grow, we will add more.

I spent the first 14 years of my career in corporate America, first as an engineer in the nuclear power industry, and later as a strategic business planner and as a project finance “in-house entrepreneur”. It took me a while to notice the many limitations on freedom that come with life in a large company but I eventually walked away from the job security, benefits, and guaranteed weekly pay checks and started a small business that made some people question my sanity. In our mid-30’s with three young children, we "bet the farm" to help convince our local bank to lend us two million dollars to build an indoor swimming complex for our small town. A large group of residents had been lobbying for a taxpayer-funded facility for years. We believed that to be fair to that 75% of taxpayers who might never use it, only its users should pay for its construction and operating costs. We dug a deep financial hole over the first three years before reaching breakeven cash flow. But throughout our 14 years of ownership it was 100% user-funded. Instead of siphoning from taxpayers, it paid $30K of property taxes annually to the town and also paid sales and income taxes to the state and federal governments. We eventually sold it to the YMCA. They invested an additional $9M to expand the complex to a full “Y” facility with a gym, health club, and other amenities. Thirty three years later, it remains a huge asset and source of pride to the small town and the region. I first skied Mt. Sunapee in the 1950’s when a single-seat chairlift carried skiers to the then-top of the mountain – North Peak. Youth lift tickets were $3.50 for the day (adults $5.00) and it wasn’t unusual to wait an hour in the lift line for a ride. My knees prefer cross country skiing these days but if you want to love NH winters, just get out in the snow and embrace it. My wife jokes that we’ve never lived in a fully-completed house and she has a point. That’s the hazard of being DIY-ers. We've renovated and/or expanded every place we've called home for the past 45 years. Most took more than a decade to complete one evening or weekend at a time. My wife and each of our kids became experts at different trades (carpentry, wiring, plumbing, painting, etc.) and they each became engineers and small business owners.

We’ve been New Hampshire taxpayers for 40 years since buying our first Lake Sunapee "fixer upper" near the State Beach in 1982. We've owned our current Sunapee home for twenty seven years and are about 95% finished completing the latest renovation begun in 2007. When my wife and I first got interested in local politics, we started learning the ropes by listening to those in charge. For more than two years, one or both of us attended every Sunapee Board of Selectmen and every School Board meeting. We also attended as many other Sunapee public meetings as we could – Library Trustees, Planning Board, Zoning, Recreation, “Old Town Hall”, Budget Advisory Commission, Water and Sewer, and others. We were shocked to discover how often we were joined by fewer than three others from “the public”. Often we were the only ones  in the audience. We attended more meetings during those two years than at least two of the Selectmen and two School Board members attended their own board meetings. We also noticed that with the exception of Selectman John Augustine, board members almost never attended other board’s meetings to get the “big picture”.

Eventually I was appointed by the Board of Selectmen to Sunapee’s Budget Advisory Committee. A year and a half later I was elected its chairman. It was an independent group of five very capable volunteers, all private citizens with experience in business and finance. We thoroughly reviewed the Selectmen’s and School Board’s proposed budgets each year. Our objective was to help develop budget proposals that would balance fairness among of all stakeholders, including town and school employees, students, and taxpayers. In early 2016, the Selectmen disbanded the BAC and replaced it with the ABC – a much larger group dominated by town and school employees who discuss and approve their own budgets. Were Sunapee citizens better off when their voices were heard by the independent BAC before the boards stopped listening? I think so, but I look forward to hearing your opinion.

Why does Sullivan County House District #8 include so many towns?

With 400 State Representatives in the NH House, you would think that each town ought to be able to have their own and that would still leave plenty remaining for larger towns and cities to have additional State Reps. But instead, when redistricting occurs every 10 years, after the U.S. Census count is complete, redistricting must ensure each of the 400 Reps covers approximately one four hundredth of NH's population. The 2020 Census counted a total NH population of 1,377,529. In a perfect world, each Rep would represent 3,444 of them. But it would be quite a coincidence if any NH town had a population of 3,444. We can't have the math that easy!

Instead, districts are drawn such that each State Rep has as close to 3,444 constituents as possible. For example, if the population of two towns combined happened to be 6,888, then two Reps could be assigned to that district, giving 3,444 to each. But there are other constraints too. House districts cannot span multiple counties, and the towns in each House district must be contiguous, i.e., share a common border. If you are wondering how Claremont could be in a district with Acworth, take a close look at the county map. Claremont has a very short common border with Croydon that seals the deal. Sunapee shares borders with Croydon, Springfield, and Goshen. Goshen shares with Lempster and Washington. Lempster with Acworth, and Acworth with Langdon. Check it out: 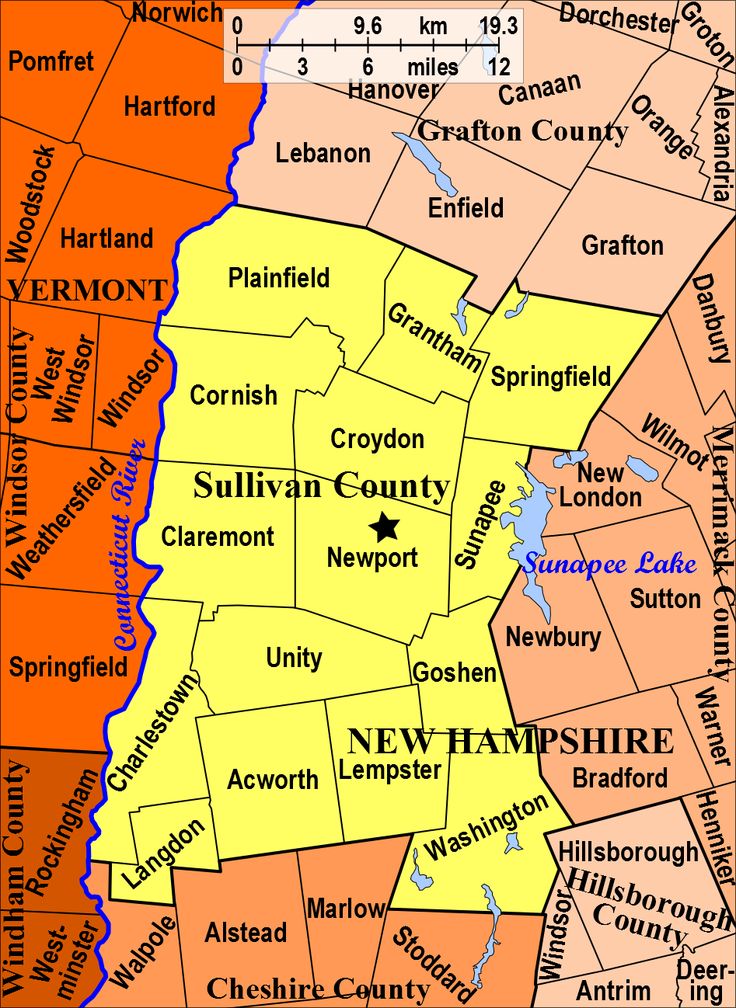 The math is more complicated but someone has apparently worked it all out. District 8 is used to boost the numbers of nine different towns which fell a little short of their goal.

Please subscribe to my email list so that I can keep in touch with you. Let's start a conversation I truly want to hear from you.

Also be sure to take a few minutes to participate in this week's survey. Use the tabs at the top of this page to get to the Home page and then scroll down to the link to the survey. Thanks for participating!

Something went wrong. Please check your entries and try again.

Which issues are important to you?

Use the links below to learn more about my thoughts on these important issues. I look forward to hearing your perspectives. I encourage to use the blog to start a conversation about the issues that are important to you!